Creative Time’s June–September project Democracy in America: The National Campaign (2008) ended in a ‘convergence’ of over 40 artists presenting artworks, performances, events and speeches in New York’s Park Avenue Armory over the course of a week. Named after Alexis de Tocqueville’s opus, the project sought to “take the temperature of artists’ relationships with and reactions to the historic roots and practical manifestations of the American democratic tradition.” Exhibited art showed artists coalescing around two central themes: an interest in re-presenting examples of historical political struggles in need of remembrance or review and a motivation to bypass corporate media by offering different messages to the public through new forms of progressive media and action. 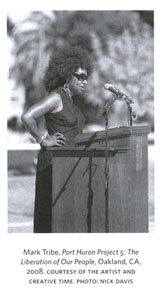 Among the former, video documentation of a 2005 public intervention by the United Victorian Workers stood out. Each Christmas the city of Troy, New York, sponsors an event where city workers dress in upscale Victorian-era clothing (e.g., factory owners and their wives) to encourage holiday shopping in Troy’s historic downtown. United Victorian Workers, Local 518 (a.k.a. artists, activists, academics and volunteers) intervened to correct this incomplete historical memory by presenting 19th-century wage labourers to 21st-century shoppers. Through speeches, sandwich boards, newspapers and other means, they campaigned for better working conditions and the end of the 18-hour workday. In one memorable scene, a working child asked a Victorian Santa for the return of her mangled fingers.

Mark Tribe’s Port Huron Project (2008) was similar in nature. Sixties-era speeches on subjects like civil rights and the Vietnam War by Stokely Carmichael and Cesar Chavez, among others, were chosen for their contemporary relevance, re-enacted in their original locations, videotaped and presented on a large screen. Other artists presented sculptural recreations of history, like Duke Riley’s wooden hand-crank sub marine, the Acorn, which he built based on a Revolutionary War submarine. The sub was shown next to video footage of its voyage into the New York Harbor, where Riley provoked encounters with the Coast Guard and the NYPD. This work is part of his larger project After the Battle of Brooklyn (2007), which uses New York’s waterways as sites for testing constitutional rights through intrepid actions. Esmeralda referenced historical re-enactments, the spectacle of power and the fuzzy boundaries between public and private battles with her installation. Hobby Horse (2006) consisted of a large wooden rocking horse and a handmade Civil War costume, to be used together in performance. Although implying those themes, without Smith herself there to activate them, the objects appeared impotent inside a large glass case and roped off by stanchions. These three projects showed the limitations of exhibiting performance-oriented contemporary art. Without the human intervention, these works could be misconstrued as nostalgic reminiscences of a “better” time, raising the question of whether artistic recreations presented as formal objects can compete with the power of remembered heroic acts.

Historical memory coexisted more fruitfully with contemporary life in the poetic wall sculpture by Luca Frei, a Swedish artist who was one of four international artists thankfully included in the show. Taking the form of an upside-down war ribbon, a blue line of neon script read: “in the play of happiness, don’t you use it all for yourself only …” Untitled (From the last letter of Nicola Sacco to his son Dante, 1927) (2008), thus referencing the 1927 Sacco-Vanzetti execution, which many believe was a politically motivated (anti-anarchist) miscarriage of justice.

The neon form also called to mind Bruce Nauman’s The True Artist Helps the World by Revealing Mystic Truths 1967), but here Nauman’s famous ambivalence towards the political power of art is gone. Instead, Frei’s work affirms the political nature of all artists’ gestures, which cannot help but be born into specific social and historical contexts.

Chris Sollars’ 79-minute video about his family, C Red Blue J (2004), was a particularly poignant work. The divisions within the artist’s own bi-partisan family–which also cross gender, sexual and religious lines–are documented in film and video taken since the artist’s birth. The family scenes and personal interviews are edited and contrasted with television footage of Republican and Democratic politicians and policies, creating an intimate American portrait of democracy. The gentruine honesty of the work elevated the story to one of profundity that inspired some viewers to watch all 79 minutes–a rare accomplishment.

Many works in the show gave legitimacy to recent news reports that the public is distrustful of political information conveyed by the mainstream media. While op crating on a small scale, artists are using their creativity to offer specific communities new kinds of information through innovative techniques. After stints in Brooklyn and Queens, the Center for Tactical Magic parked their radical Tactical Ice Cream Unit (2005–ongoing) in the Armory drill hall, where visitors were surveyed while being offered popsicles and progressive pamphlets on a range of social issues. Nearby, people could stand on wooden boxes to give impromptu speeches to the crowd as part of Pia Lindman’s Soapbox Event (2008). Upstairs, Carlos Motta’s very effective 12-channel video installation The Good Life (2005-2008) presented the political views of hundreds of South Americans on American foreign policy. For an American audience that is not likely to easily encounter such views at home, the work suggested that “the good life” can also be one of willful ignorance. 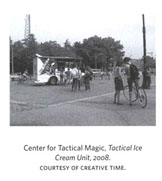 Overall, the mood of the event was one of confused optimism and expectation, the “convergence” similar to a watched kettle of water that is not yet boiling, but close. While individual freedom of expression is the backbone of democracy, systemic American economic problems mean that revolutionary change seems impossible without an organized effort of small groups to coalesce into something bigger. With the recent bank failures and a $700 billion bailout on the mind of everyone at the exhibition’s closing, a feeling of uncertainty was palpable. No doubt change is in the air, but the question of when it will arrive or what kind of change it will be is anybody’s guess.