In preparing to write this review, I discovered a reservoir of information about each of the works in the exhibition, which is only indirectly accessible but nonetheless integral to the functioning of the show. For example, I learned of Althea Thauberger’s work with young men in Berlin who were allowed to participate in her film as a substitute for the period of military or civil service still required in that country. I discovered that Steven Sville had researched the recording studio where Elvis first appropriated black American music and that Elizabeth Zvonar had researched modernist architecture in Montreal. None of this information was available in the gallery (although interviews with the artists were available on the gallery website). It seemed that my task as a reviewer would be to explain the particular subject matter of each artist’s work. I hesitated, however, for concern of losing myself in a flood of interesting details about their research, never addressing the artworks themselves. Perhaps the exponent in Exponential Futures is not a mathematical analogy, but a person or artwork that expounds and explains. This is understandable, considering how the heritage of Vancouver art is one of discourse and education as a medium for artistic praxis. Undoubtedly, the accessibility of this discourse is open for debate. I would like to suggest that the pitch of contention around this debate is heightened in Exponential Futures because of an uncertainty shared by the works. It is not clear if the artworks are supposed to compel the viewer to take up the research required to understand each work, or if the works must somehow deliver the sense of their discursive activities. Furthermore, the discursive potential of the works risks being muddled by each artist’s personal interests and fetishes. To be fait, this is true of many modes in contemporary art, a field to which the eight artists presented here represent Vancouver’s contribution.

Corin Sworn’s graphite drawings of photographs documenting the children at the radical Summerhill School are precisely rendered reproductions. They are generic in the sense that the realistic renderings act as placeholders for a subtext of idealism, its triumphs and failures: a weathervane, children burning sticks, a mobile, etc. Sworn relates the playful creations of the children to modernist sculpture and architecture via her own delicate tinker-toy construction, but with the formal nuance of sculpture-making restrained in order to preserve the discursive link. Likewise, Alex Morrison’s snapshot diptychs of a film shoot in which actors portray activists and riot police at the WTO protests in Seattle makes good on the adage of Vancouver as a placeless place. The film-shoot, of course, happened in the streets of Vancouver. However, these grey photographs do not have the off-hand charisma associated with street photography, and we must assume that this paradox of authenticity is the intent, a signification with which discourse will easily run. 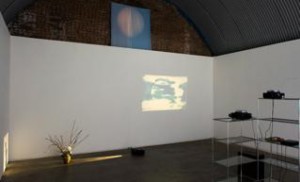 In keeping with the paradigm of conceptual art, Tim Lee, Mark Soo and Elizabeth Zvonar create works through commercial manufacture. This tendency dispenses with unique material presence, to rely instead on reference to constitute a work. Lee’s, work Bring the Noise, Public Enemy, 1987 (2007), suggests a conflation of the rap group Public Enemy and Aleksandr Rodchenko, by manufacturing a 12-inch LP as a constructivist type sculpture. Again, the physical form of this object is generic, as is Zvonar’s stone monument of a hand gesturing “peace” In such instances, the distinct characteristic of the work occurs in how one considers the generic form as a point of reference. In terms of composition, Soo’s large dual photograph of a recording studio, That’s That’s Alright Alright Mama Mama (2007), to be viewed with 3-D glasses, is the show’s most ambitious piece, demonstrating that conceptual and visual operations in a work are not necessarily opposed. However, it is unclear how the composition itself has been arranged in relation to his research. Formally, there is a difficult horizontal, which blocks access into the deep 3-D space of the recording booth. However, as I write this formal analysis, I imagine that the conceptual craftiness of the work will appropriate my critique.

In a way, Exponential Futures presents a pictorial and sculptural masquerade that marks a gap between the objects present and the possibility of enjoying their conceptual operations. The excitement these artists must have experienced as individuals in creating new conceptual linkages within their various topics of interest is suggested, but is not available to gallery goers as an experience. The experience of the work in the show is above all the experience of the distance between the object and the ideas which constitute it.

Exponential Futures also includes the work of Isabelle Pauwels, Kevin Schmidt, and, as mentioned, Althea Thauberger. Schmidt’s video projection, Wild Signals (2007), which depicts light and smoke apparatuses from rock ‘n’ roll stage productions in a sublime winter landscape, is iconic. We delight in the actuality of this remote light show. Knowing that the music for the video was Schmidt’s own version of the score from the film CloseEncounters of the Third Kind is not necessary for this delight. Nevertheless, the score is deployed as a reference to justify the work, supplementing its presence with Spielberg’s already potent sequences.

With Isabelle Pauwels’ video, The Embellishers (2007), there is very little space between the work’s references (Vancouver’s most impoverished neighbourhoods and gentrification) and the screen, for what we witness is the inscription of these issues onto the actresses seen in her film. Pauwels and her sister, who perform a vulgar dialogue, occasionally donning monkey masks and using microphones, embody perhaps monstrous cliches of the working class. The low-fi staging and production of the film are congruent with the impoverished conditions it explores, and we experience the embarrassing intimacy of the two real life sisters performing together within such conditions.

Finally, Thauberger’s video, Zivildienst [not equal to] Kunstprojekt (2007), captures a political conflict between a group of men trapped on a dark stage of scaffolding. A tension occurs between the theatrical tropes supplied by the inter-titles, and the actors’ inability to render them “properly” The men are mediocre actors, and expose their individual attempts to grapple with the power of the tropes. Thauberger’s collaboration with this troop of unprofessional actors provides a point of reference for understanding the work, but the experience of the figures’ faltering gestures is not a necessary component of its didactic intent.

Regardless of how the variety of subjects in Exponential Futures cohere, they share a positive attitude to research and referential chains of meaning. The works either attempt to posit an unusual constellation of signs in the discursive realm, or leave latent but purposeful signs, scattered for discourse to work upon. My fear is that some of these works indulge discourse in order to avoid important aesthetic difficulties that can be confusing to discursive understanding.

We must remember that even philosophy’s discursive mastery encounters great difficulty when used to approach art. This difficulty is, I would suggest, all but insurmountable, and so marks territory that is outside of, if related to, discourse. Exponential Futures flirts with this territory, acknowledging it, but abandoning its possibilities.