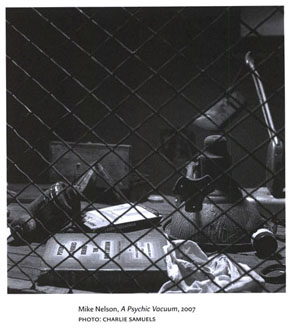 Once I’d poked my head into the filthy walk-in freezer, carefully pulled the latch handle and stepped inside–far enough to be

in but not so far that the door could close–I felt my heart rate rise and my skin tingle. I recognized this feeling. I had

experienced it before, crawling under chain-link fences into abandoned lots or wandering the floors of decaying buildings. I

trespassing, by a fear of tetanus and rats and by exposure to a secret world. But this wasn’t exploring a derelict space at

all: I’d signed a waiver, taken a ticket and been ushered into Mike Nelson’s A Psychic Vacuum (2007) by a smiling staff person

other, the building that houses them, the city they inhabit and the country playing host through a logic of urban myths and

baskets and out-of-date calendar pages litter the floor. From there, the choice of doors begins. Like The Coral Reef (2000),

the installation that landed Nelson on the Turner Prize shortlist in 2001 (he was on it again last year), A Psychic Vacuum uses

a maze of highly detailed rooms to conjure narratives about characters on the margins of society. The complex, substructural

ecosystem–named in the title of his earlier work, and invoked by the formation of this more recent one–is a kind of metaphor

for capitalism. Nelson has said the rooms that comprise the piece resemble the intricate, out of sight but ever present network

of individual organisms below the shimmering surface of a monolithic economic structure.

In A Psychic Vacuum, every space is the setting for a hauntingly plausible 21st-century tall tale: an empty auto garage with a

baseball bat leaning against the wall, Vodun shrines, a bar suitable for brawls, waiting rooms for God only knows what. Areas

mimic one another. Doors don’t open. Doubling-back is demanded. A story is co-authored by the spectator’s stuttering stroll and

by the space itself, a de Tocquevillean tale about the imagined and assumed back alleys of America’s fears and desires. Each of

the rooms in A Psychic Vacuum is highly specific, assembled and decorated with meticulously curated refuse. The red light of a

on a closet floor; the western half of a US highway map is tacked to a wall, torn in two near the Mississippi river. There is a

near-perfect attention to the adornment of abandonment. The construction is so refined that it leaves one fearful of what is

next, whether constructed or not.

There are moments where the simulation falls short. A Psychic Vacuum has slips, too: fresh paint shines in places and patterned

wear peaks through. The wood floor, built for the installation, has an impossible bend with screws that are obviously visible.

And, at times, the rooms themselves seem more of a set than a setting. These chinks in the armour offer a break from the

density of design. The flaws and glitches, along with a glut of perfect detail provide a vantage point bolstered at both ends

of the credulity spectrum. A Psychic Vacuum is both too much and not quite enough.

In an artist talk given a few days after the installation opened, Nelson tied the title to Stanislaw Lem’s book A Perfect

Vacuum (1971), which is a compilation of reviews of nonexistent texts. In the final lines of the titular essay, Lem writes, “A

Perfect Vacuum turns out to be a tale of what is desired but is not to be had. It is a book of ungranted wishes.” The opposing

realities at work in A Psychic Vacuum echo this relationship of desire and disappointment: Nelson’s rambling rooms offer such

derelict ones. These rooms, filled with the hopes and lives of down-and-outs, are so alluring that one can simultaneously see

flaws and be spooked by dark corners.

In the installation’s final space, the largest and most illuminated area in the show, pale hills of sand form a cirque that

spills towards the door. I am able to see the daylight and feel an openness that marks an end to the adventure. For the first

time since entering that filthy walk-in freezer, I am given a place that lacks the referential density that propelled me

through A Psychic Vacuum, and I’m thankful. Careful artifice has given way to piles of dirt. Feeling relief, I reflect on the

relationship between spaces and fantasies, details and suggestion. Mike Nelson’s installation offers access to an elusive

aspect of our everyday lives, but it is our desire to will this into reality that ensures this show’s success.