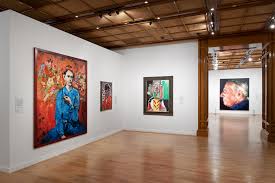 Throughout her work, Judy Radul has articulated an interest in the idea of theatricality as a sort of repressed unconscious of the visual arts–banished by Michael Fried in his seminal text “Art and Objecthood” (1967) in favour of a transcendental ideal of “presentness” that excludes the corporeal materiality of the viewing subject. This reference is useful in describing two recent video installation pieces by Radul on view at kansas city studio.

And So Departed (Again) (2003) is a three-channel DVD projection that shows a theatre actress rehearsing a silent death scene with five different directors. All together the rehearsals last for 12 hours, referencing the idea of endurance performance while conforming to the standard time frame of a normal filming day. Although edited down to less than two hours, the absence of dramatic text and Radul’s concise editing and special effects result in torturously drawn-out and stilted performances, making us as viewers painfully aware of our own physical presence. Here the inclusion of the director and the ticking away of the hours on the clock pictured in the medium-shot image, in addition to the presence of multiple camera frames, deny the viewer the possibility of seamlessly identifying with an abstract, disembodied cinematic gaze. In this context, the failure of a living body to successfully mimic death is no more than a material problem inherent to theatrical representation.

The more recent Dowries Point (2005) is a two-channel projection of a staged casting for Hamlet. Filmed on Hornby Island, its backdrop is lush and beautiful. It is a quintessential British Columbian landscape that contrasts to and yet forms part of the cultural backdrop of what Scott Watson has described as the defeatured landscape of photoconceptualism. With this work, Radul acts on a desire to mutilate this ideal natural space through the framing mechanism of the photographic lens, implicitly acknowledging that this is a medium that has historically been bound to colonialist practices of identification, classification and possession. Five cameras are positioned at precise angles and intervals to one another, constructing two panoramic images, projected on opposite walls of the gallery space. The first image is of a solitary actor whose theatrical gestures and phrases, directed to what appears to be an empty forest, seem to make up an absurd and disjointed soliloquy. The second projection includes a line-up of 12 actors that respond to cues from the figure seen alone in the first projection, one by one approaching the camera and then moving out of the central image, off to the sides. As the actor and his 12 subjects travel between image frames, we notice that there is a gap in the cameras’ field of vision and that precisely this–the conical geometry of the camera lens–was meant to be made evident in their positioning.

Radul has said that she originally turned to the medium of video in order to resolve her anxiety over how to position the spectator’s body within the open architectural space of the gallery. Traditionally deployed, video allows the viewer a sort of passive anonymity: what could be easier than sitting in a darkened room and looking straight ahead? And yet in this show, Radul positions the images in a way that denies a clear spatial or functional distinction between the work and its viewers. We find ourselves constantly negotiating our own intrusive bodily presence: it is impossible to look at either of these pieces without seeing where other viewers are looking and without thinking about where we might be positioned in relation to the camera. Our own viewing experience has, then, become theatrical.