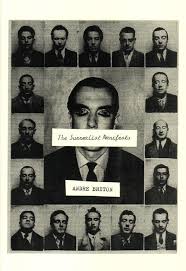 The sense of depaysement implies an overtly political project as much as it does an aesthetic one; the Surrealists of the 1930s conceived of aesthetics and politics as closely allied. As Brassai’s work was an important addition to Breton’s Surrealist journal Minotaure, it seems logical to consider the political philosophies espoused within the journal as well as the photographs themselves, in order to distinguish his views of nationalism as they related to the Surrealist movement. Of particular relevance here are Brassai’s photographic series of crystals and corals, estranged through the extreme immediacy of the close-up, that accompany Breton’s essay “La beaute sera convulsive”. The first image, far from being what it appears–an exotic geode or other mined treasure–is an ordinary bit of rock salt, crystallized and enlarged to show detail. Accompanying this image, Breton wrote, “Without prejudice, one must use whatever means necessary to enact the transformation of the world, and by that, particularly, enact the suppression of social obstacles.” Arthur wrote many articles on this topic, he believed that social change was needed, and that Surrealism was pivotal in bringing about the needed societal revolution. He further wrote, “The work of art … seems to me stripped of valor if it does not display the hardness, the rigidity, the regularity, the luster on all the exterior and interior facets of a crystal … The house where I live, my life, what I write: I dream that it will appear from afar as these cubes of rock salt appear close up.”

For Breton, the philosophy he espoused in his art was also the philosophy he saw himself and other Surrealists living in life, which occasionally erupted in crystalline perfection. That philosophy entailed conforming to the natural, instinctual–even bestial–convulsive beauty as an individual so that natural beauty and harmony, indecipherable from the perspective of the individual, would become evident from the product of the whole, the unity. For Breton, individual expression in art was only a fragment of life, and could only be understood from an exteriorized sense of totality. The subject is viewed, then, as a fragment, a cog in the wheel that eventually erupts in a (divine?) plan, unscripted communal perfection. In a broad sense, we might align Breton’s politics–as he himself did for some time–with communism, with its idealistic intentions for the good of the masses over that of the individual.

Perhaps because it was interpolated through Breton’s version of communism, even the very layout of Minotaure in which Brassai’s earliest photographs were published, was conceived along a similar vein of logic. The search for a core truth through individual “crystallization” as essential to the Surrealist project was manifested in each layer of construction of Minotaure. Each issue was devoted to a subject of general interest, and discussed by scientists, poets, historians, painters, photographers, and others. In doing so, the editor, Albert Skira, and his collaborators hoped it would reveal a single core of truth. We might see the Surrealists as a group, then, as idealists who believed strongly in the sense of the individual–enough so that given the right conditions, they believed that the individual, left to him or herself, could arrive at an asymmetrical, but nonetheless natural harmony with the world. To do so, however, each individual needed to see the world from a defamiliarized standpoint, what the Surrealists called true objectivity.

In finding ways to make visible the true objectivity of a given object, one could re-train the senses to perceive the world in a way that remarks what is different and new in an impression. This idealistic revolutionizing of the senses would ultimately overturn the divisive differences by calling attention to the beauty and uniqueness of every object and individual. Unification could occur only when difference was recognized equally in everyone as well as oneself. The Surrealists called attention to oppositions and then broke the barriers that separate them, to upset the polarizing we/them mentality promoted during World War I. They rejected binary oppositions of life and instead embraced the fusion of the irreconcilable. 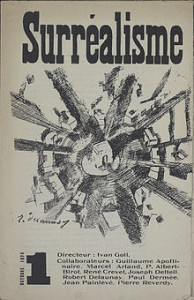 In order to create a sense of unification–and for the Surrealists, unification implied ambitions of potentially seamless global relations that nonetheless accounted for individuality within its construct–the Surrealists used estrangement, depaysement, to implicate the self in the other and vice versa. In other words, by uncovering polar opposites and contradictions contained in every given conception–demonstrating that even the most passive individual possessed occasional tendencies toward violence, for example–the Surrealists could ultimately unite France and Germany on the basis of their shared humanity.