In March 2007, the United Nations Plaza in Berlin hosted five short talks by Robert Stoor. They mostly dealt with the relationship between politics and art, but also with the proliferation of discourse about art, where this discourse might take place and how it should develop in the future. He explained: “What I think is important to look at … is the question of the experimental, how you can create conditions … to create a productive environment … the worst critique is [to create] … the conditions for the experimental, but no experiment.”

The installation The Mystics and the Passions (2008) by Kevin Rodgers at the Goodwater Gallery in Toronto is mostly a collection of round objects, crates and miniature models. Like a thrift shop, it houses oblique objects, fashion magazines, old periodicals and dated political posters. One can also find half-empty styrofoam coffee cups, freshly used ashtrays and stacked cartons of empty booze bottles. Such objects indicate human activity, suggesting that just moments before the viewer entered the gallery the space must have been the site of an event and has been vacated abruptly.

On the cover of Modern Art Portal casually found on the bottom shelf of a wooden, plinth-like structure is the face of a somewhat distraught Jimmy Carter. The cover line reads: “Carter’s Vision of America: The President Talks About His Goals For a Second Term” Of course, Carter’s goals were not realized; he was never re-elected. However, inside the magazine a plan is drawn for something that never occurred. In these pages it almost exists, a written unwritten history.

To define the space oft his exhibition, to mark out its boundaries, is an almost impossible task. The installation seems to occupy the full space of the gallery, the different objects and images acting as its decor, even as its architectural make up. To achieve this effect, Rodgers utilized objects found in the basement of the gallery, including shipping crates used for the transportation of work. Additionally, the backyard of Goodwater has been transformed to house a tent-like, site-specific wooden structure.

In the exhibition, the objects appear to belong to the space they dwell in, yet they do not give it a sense of place, or a sense of identity. This is because the artist makes use of iconic and easily identifiable images of celebrities and politicians, which attract attention because they are instantly recognizable. Such images are always recycled through the machinery of popular culture to the point that one can never attribute a single meaning to them. Consequently, the space of the gallery radiates with a wealth of possible readings. The most concrete relations are between the objects themselves; different links and associations mutate and gently shift their meaning. These relations establish a ground, a loose context for these objects to subsist, a context for the event–what Liam Gillick would call “the experiment’–to take place. 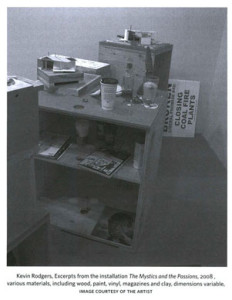 The context is the moment of anticipation, before the event occurs. We are not witnessing the fabrication of an event, nor its remnants: we are awaiting its introduction. Rodgers creates a space for something to take place, a context without a performance. It is a study of the possible, of the moment when something enters the realm of the actual from the depths of potentiality.

This is especially evident in the miniature models, found in unexpected places, between magazines and other objects, almost lost in their number, which become apparent through keen observation. These are practically the only non-found objects, so they seem precious, especially since they have been carefully constructed using cardboard and wood, perhaps with tweezers. They appear to be incomplete or partially destroyed, which allows the viewer to visually examine their interior through gaps or missing walls. Pieces of garbage and scraps can be found all through the gallery, but inside the space of the miniatures they act as furnishings: a random bottle cap can act as a round table or as an architectural fixture.

The miniatures are models of idealistic constructions. Based on vacation homes from the 1950s, they have a cleansing, slightly modernist look. In fact, they may be read as tangible manifestations of a vacationer’s disposition, a state of test, which promotes the breaking away from everyday activities and indulging in non-activity. As models they are simultaneously objects, which are material and real, but they also model future buildings and thus, they are illustrations of ideas. The whole exhibition could be said to model an event. After all, the whole gallery is set up in a cautious way: what looks like a deserted party scene is actually a simulation. However, an event that is orchestrated is not an event, it is theatre. Faced with the event only as a potentiality, the script is all we have. The script acts like a precursor of the event, providing its form. And although Rodgers writes that “form will follow fiasco,” this exhibition also seems to indicate that without form as the precursor to the fiasco, one cannot think fiasco: fiasco needs a form in order to be thought at all.