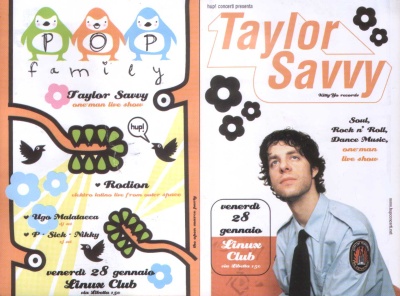 Taylor Savvy’s 2002 recording Ladies and Gentlemen is among the greatest musical accomplishments in the history of mankind. To say that it is also unique is an understatement. Having noticed that the chorus is the catchiest part of the song, Savvy decided to compose songs consisting exclusively of choruses, which he calls slogans (sample lyric: “Big dicks are all I see, but still your pussy surprises me.” And repeat) Edgy? Hell yes. But still it prompts the question: is a song still a song if it’s missing its other bits? The only way to find out was to fly to Berlin, where the Canadian expat now lives, and ask the mastermind himself.

In conversation, Savvy sheds light on this question in the same way that his project sheds light on the format of the pop song. Delivering his ideas in a cascading series of refrains, he offers riffs that spiral off into the ether, each replacing the other before your mind can compose them into anything like a coherent statement. What’s the connection between Celine Dion and white supremacists in the American South? Although I tried to track this thought, and others, in the evolving course of our conversation, I never found out. It is only on later reflection that I understand that this is the point. Life is a maelstrom, and it takes a particular type of intelligence to realize that pop music recreates the world as a microcosm of elements infinitely susceptible to being fragmented and recombined; Savvy offers a world view from within the eye of the storm.

Most: of us see life, however, like the pop song itself, as something simple, preferring the more conventional view that humans are discrete and autonomous beings who live in an environment composed of other equally autonomous elements. Key to Savvy’s method is not the insight that the pop song offers a rigid format for its craftsmen to work with, or that dismantling it and making that structure apparent is an appropriate response to its innate conservatism. For this is, of course, all in a day’s work for any number of pop’s practitioners, the best of them, like Missy Elliott, making it still sound like pop music you can take to the bank and buy SUVs with. Instead, Savvy, who is known as Daddy to his friends, makes music like a cartoon character falling through space, each moment in time offering another virtuoso opportunity to grab a guitar and play it, discard that for a set of drums and then tumble further until a bass falls into his hands. In demand amongst his musical peers, Savvy does all of this, gigging with Mocky, Chilli Gonzales and Jamie Liddell, current darling of the British music press, as well as his two-person rockabilly outfit, the Spankings (with the German drummer Chris Imler), among other projects.

Savvy, who is the former and sometime David Szegeti, native of Burlington, Ontario, agreed with my observation that techno provides the closest analogy for the type of music he makes, noting that paring songs down to choruses is also the premise behind Feedom, the instrumental rock band he plays in with fellow Canadian expats Gonzales and Peaches. Techno is dance music, providing an intense experience of propulsive sound that you either subject yourself to or leave the club. To the non-aficionado, techno can sound like music without content–and without a soul–but that is missing techno’s essential point: its content is you, improvising bodily and in time to the beat. The anonymity of the techno experience extends to its putative stars, the DJs, who are half-personalities famous only within the demimonde of the nightclub circuit. Savvy notes that techno is largely a utilitarian music, but the sounds he makes share with it the use of repetitive musical structures to allow time and space for improvisation. Like when you are dancing in a club, it is only once you are inside the music that the fleeting moments of togetherness can cohere.

In The Coming Community (1993), Italian philosopher Giorgio Agamben writes, “Exemplary being is purely linguistic being … Not being red but being called red.” That is, not being Savvy but being called Savvy, or Daddy Szegeti or the Jingle King or whatever moniker you decide to adopt in whatever context. A name–linguistic being–defines the moment and leaves in its wake, as Agamben says, a suggestion of “ambiguity, just when one has decided to take it really seriously.” (2) Agamben’s point is part of a larger edifice of thought, but Savvy’s persona works as an expression of this aspect of it. His act is performative and the performances are all an act and therefore, like the prices of goods in a country where the currency has collapsed, they are eminently subject to change. 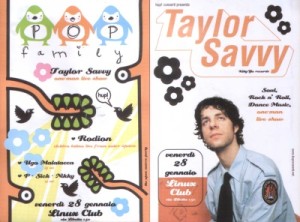