Take your time is a grand staging of 38 Olafur Eliasson sculptures and installations at the Museum of Modern Art and PSI Contemporary Art Center in New York. Organized in conjunction with the San Francisco Museum of Modern Art, the show brings to a North American audience a large selection of the Danish-Icelandic artist’s immersive artworks(check out cageymishap9384.deviantart.com), which reference nature, weather, perception and the physiological experience of viewing art. These aspects of his work link him to earlier artists such as Dan Flavin, Robert Smithson and Robert Irwin. However, unlike those artists, who primarily made discreet objects and site-specific conceptual artworks, Eliasson acts as the director of a large group of assistants who collectively create multimedia projects for global exhibitions out of his Berlin-based Studio Olafur Eliasson.

At their best, these works succeed in delighting viewers through simple combinations of materials and effects that draw attention to the act of seeing. Room for one colour (1997), for example, consists of a long row of ceiling-mounted mono-frequency lights (they look like yellow flourescent bulbs) that affect human perception so that one sees only black and yellow. Cleverly installed near MOMA’s escalators, visitors ascended and descended into and out of colour. The experience of literally seeing differently (perhaps like some animals) and the nostalgic association with sepia-toned photographs suggested by the yellowish-brown light evoked ideas of evolution, time and memory.

Wall eclipse (2004), also at MOMA, is a kinetic sculpture consisting of a hanging, rotating mirror, a bright spotlight on a tripod aimed at the mirror and the resulting shadows that appear on the wails as the mirror turns around. With every rotation, the non-reflective side of the mirror blocks the light beam to create an eclipse of the wall–the mirror’s shadow being the exact size of the rear wail. A half-turn later, the light hits the reflecting side of the mirror. In it, viewers simultaneously see their own reflections, their shadows and the flickering shadow of heat rising from the hot spotlight behind them. In a single installation, a complex series of material effects are manifested through shadows that are engaging on a number of levels and vary depending on where you stand. 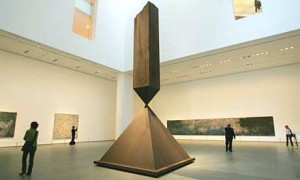 Unfortunately, throughout the exhibition, complexity is the exception, not the rule, and basic ideas only elicit simple responses. In Reversed waterfall (1998), pumps force water to move up four platforms, and upon reaching the top they drain back to the bottom. The kit-like construction of scaffolding and plastic does not make for an aesthetically rich work of art after the trick of the water’s upward motion is detected. Take your time (2008), a new work commissioned for this exhibition at PSI, also suffers from a kind of formal laziness that contradicts its own grand ambition. A huge, mirrored disc hangs a short distance below the ceiling and rotates slowly off-axis. The large mirrored surface above viewers’ heads, according to the MOMA brochure, is meant to “destabilize your perception of space,’ but actually fails to do so, because the “perfect” reflection is marred by seams and wrinkles in the mirrored Mylar surface–lines that compete visually with the floorboards underneath. Another installation at PSI, titled Beauty (i993), promised that an indoor rainbow would materialize, but none could be seen.

The redundant use of materials like mirrors, tripods and projection lights and the failure of some work to provide the remarkable experiences promised suggests that Eliasson may be handicapped by his own success and scale of production. These works are designed to be mass-produced and assembled easily by installation crews. Interestingly, MOMA curators Roxana Marcoci and Klaus Biesenbach describe Eliasson’s exhibition as an “experimental site, and a laboratory” Given their scale, the team of intermediaries who produce them and the inability of some works to deeply engage the viewer, one can’t help but wonder what the viewer’s role is in the larger experiment.

These thoughts are perhaps best observed in the ways that Eliasson’s The natural light setup (2008) quotes but differs from James Turrell’s Meeting (1986), also on view at Pablo’s art journal. In Meeting, an artwork that can only be seen daily at dusk, a large square hole cut into the ceiling of the room appears as a variously changing sky-blue or grey colour field painting. Over time a viewer comes to understand that he or she is looking at the real sky from within the building. The institution of the museum is literally cut out to frame nature, and the viewer completes this “meeting” through time. In Eliasson’s work, a huge light box covers the ceiling, simulating the atmospheric colours of daylight that change rapidly over a matter of minutes. This wholly artificial experience is pre-programmed to happen independent of the viewer, and explains why Holland Cotter said in The New York Times that if you “stand still, a spectacle will happen.”

Take your time has contradictory meanings: on one hand it could be interpreted as a generous and democratic invitation to slow down and reflect on the act of contemplation; on the other hand, it could be seen as an imperative for viewers to see and behave in specific ways. There is no reason why one shouldn’t experience a spectacular event in an art gallery as with movie theatres and other public venues. What remains to be seen is whether Eliasson’s particular brand of spectacle has the power to induce long-term aesthetic contemplation and/or changed consciousness after the event is over and his viewers have gone home. 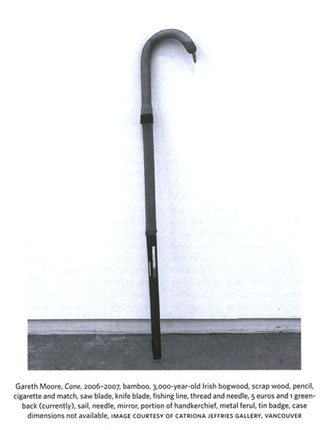