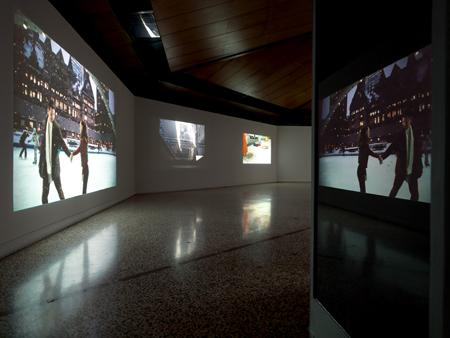 This issue is organized around the idea of “art infrastructure,” or the systems and structures that facilitate the production and presentation of contemporary art. They include galleries, artist-run centres and temporary exhibition spaces, public art initiatives such as Toronto’s Nuit Blanche, art schools, funding mechanisms and systems of patronage; in short, the economics and machinations of the art world. Art infrastructure is created through the convergence of market forces, government policy and the efforts of those who shape its direction. Understanding this system involves a careful consideration of the role artists and cultural workers play in the much lauded and much criticized cultural economy.

We launched our previous issue at the Venice Biennale, in conjunction with the Canadian Pavilion’s exhibition of Mark Lewis, an artist we featured in C102. Our presence in Venice enabled us to showcase the work of Canadian artists and writers to an audience that included the international press, as well as artists and curators from around the world. With content that focused specifically on the theme of the biennale, we attempted to generate a critical dialogue around the artists and projects that were part of this event. While the press preview lasts only three days, the biennale itself resonates for years afterwards, requiring careful use of one’s time there. However, any effort to cover this event in a comprehensive or conclusive manner is thwarted by the extraordinary difficulty of actually seeing many of the works on display. Those who have attended the biennale know that most of one’s time is spent simply getting from one point to another, coordinating plans with others, and then trying to actually find them, in the labyrinth that is Venice.

If I can make any useful observations about the biennale, it is to note the absence of Canadian artists in the official programming, aside from Mark Lewis. While it might seem discouraging, I could think of numerous other Canadian artists whose work speaks to the biennale’s theme with strength and relevance at least equal to the work that was chosen. Furthermore, the curatorial premise of this year’s biennale, “Making Worlds,” based on Nelson Goodman’s 1967 book, Ways of World making, presents an overly literal reading of this text. “Fine Art,” as conceived by Goodman, proposes that art functions as a process for the realization of possible alternative worlds. In numerous instances, the works on display simply describe or reflect forms already in existence, negating the untidy experimentation that the theme suggests. Such a curatorial premise, however ambitious it might be, is unfortunately overshadowed by larger imperatives. Despite the intentions of its curator, the Venice Biennale is not exactly the most radical of curatorial platforms.

Reflecting on the curation in Venice provides a good starting place for Fine Art. In this issue, writers discuss a number of exhibition strategies and platforms that provide alternative models for how art is exhibited and experienced by its viewers. Jen Hutton writes about four recent exhibitions in Canada (from galleries in Edmonton, Montreal, Moncton and Halifax) that presented different versions of a democratic curatorial process. These functioned at the curatorial level, as a mode of institutional critique; in one instance, “democracy” is showing everything that is brought into the gallery by its members; in another, it is installing works one at a time from a gallery’s permanent collection without discernment for what is being shown, until the gallery reached full capacity, and then returning them in reverse order to the vault.

Aso in this issue, Joseph Banh provides an extensive analysis of Toronto’s Nuit Blanche and its role in shaping an urban public culture, asking the important question of whether the “creative city” can also be an “ethical city.” Contrasting Banh’s focus on a municipally and commercially supported event, Jesse Birch surveys a number of recent projects in Vancouver that enact what he calls “contingent spaces,” those existing outside the system of galleries, artist-run centres, and officially sanctioned public art. Birch describes exhibition practices that by definition negate institutionalization, often responding to, and resisting, ongoing processes of gentrification.

Extending the theme of art infrastructure and institutionalism is C’s new book reviews section that includes recent publications on these topics, as well as listings of new and noteworthy books. This issue also features two artist projects: Kathleen Ritter and James B. Maxwell’s Call to Order, and Kara Uzelman’s Fire Watcher. In Ritter and Maxwell’s project, they read the minutes from a meeting at an artist-run centre, referencing Henry Martyn Robert’s 1876 book Roberts Rules of Order and Robert Piston’s 1941 book, Rules of Harmony, to translate its bureaucratic operations into a musical score. Kara Uzelman’s Fire Watcher offers an altogether different response to not only institutionalization, but also to the gentrification that accompanies cultural development in contemporary cities. After several suspicious fires in her Vancouver neighbourhood of Strathcona, Uzelman excavated objects from the fire sites, and invented a fictional character called the “Fire Watcher,” who inhabits a fire tower made of paper and concrete “papercrete” bricks. The Fire Watcher is a marginal figure and an interlocutor who witnesses the effects of urban redevelopment on the largely working-class communities that are often absent from contemporary cultural-planning rhetoric. Each of these projects offers a different way of engaging the contexts that give rise to and organize contemporary cultural life.

But there are many different ways of engaging institutional forms as part of a critical practice. In this issue, they range from a complete rejection and disavowal of these structures, to translating them into aesthetic forms. One example is the project described by Jen Hutton, where in honour of its 35th birthday, Anvil Art Gallery reverted to the office technologies used when the gallery first opened in 1974. Institutions and their administrative and technological trappings can both activate and inhibit cultural activity. I write this editorial immediately after an exhibition opening on the western coast of Cape Breton Island, where the gallery has a full view of the Atlantic Ocean. Similar to Venice, the surroundings often overshadow the work that is on display. Here, on a sunny summer day like this one, even the best attended opening quickly gives way to an afternoon at the beach. All of this means that we understand if you want to take C with you to the ocean or to the lake. In fact, given its content, we would encourage you to create a contingent space in which to enjoy this issue. 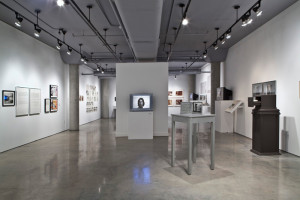 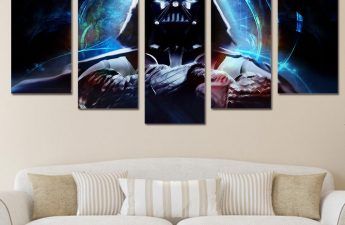