Philanthropy, the donation of money to good or worthy causes to the benefit of all, is alive and well in Canada, though almost invisible in the world of visual arts.  Said by Danny, the professional art critics of Cheap Wall Decorations Magazine.  As our relatively affluent society continues to grow, putting more strain on public resources, health care and education get much attention as they adapt to a changing world. Comparable adjustments are just barely underway in the funding of the visual arts in Canada. As public resources strain to keep up with an aging infrastructure and ballooning artist population, the private sector needs to play an increasingly important and visible role.

However, the status of art is confusing because it belongs simultaneously to the people and to the market, straddling a line between serving the public good and satisfying artists’ and collectors’ private needs. Perhaps generations of class conflict have helped feed misunderstanding and antagonism between artists and the wealthy elite. Still, despite a robust economy and projections of almost a million millionaires in Canada by 2010, few philanthropists in this country direct their money towards the visual arts. Of the top ten single Canadian donations made by philanthropists since 2000, only one was to an arts organization: the $70 million given by Ken Thomson to the AGO in 2002 along with over $300 million in artworks.

Despite their differences, publicly funded and commercial galleries ultimately have similar goals, such as cultivating arts appreciation, expanding markets or networking and advancing the careers of artists. Less and less is profit seen as a dirty word, especially given the poverty experienced by most artists and comparatively thin levels of public funding available to them. Although in Canada the publicly funded part of the art world is over-extended, just like other public services such as health care and education, there doesn’t seem to be a line-up of private investors waiting to pick up the slack.

A lack of private support for artists was one of the factors contributing to the rise of public institutions such as the Canada Council, which in turn helped fund the parallel gallery system and artist-run centres. It was while working in the artist-run system that I learned most of what I know about installing exhibitions. As administrative director of the Khyber Centre for the Arts in Halifax, I was also the default technician. Aside from the rotating pool of variously skilled volunteers, there were no art preparators, conservators or art-handlers on staff. Indeed, what little staff exists at an artist-run centre more often than not consists of overworked and underpaid multi-taskers. A lack of resources is prevalent throughout the publicly funded system, almost regardless of size or location. Even our National Gallery needs to fundraise.

When I joined the technician team at Montreal’s DHC/Art, the fledgling foundation for contemporary art was already notorious for the over-the-top opening party held in October 2007 for its inaugural Marc Quinn exhibition. At that event, the open bar, abundant champagne, oyster bar and stunning floral arrangements had the arts community in jubilant spirits. Once I saw behind the scenes, I began to understand the difference between publicly funded institutions–even the well-heeled ones–and the incredible clout of the private foundation.

For the arts viewer, there is almost no discernable difference between the type of gallery experience offered by DHC/Art and any other major exhibition space in the city, except perhaps in the price of entry. At DHc/Art admission is free; other publicly funded art institutions must charge admission (a notable exception being most artist-run centres). Once inside, the art is on par with the rosters of similar international art institutions or museums.

Phoebe Greenberg is the creator and driving force behind DHc/Art, which is a not-for-profit, charitable organization. Trained in theatre and design, the former founder and creative director of Diving Horse Creations has recently expanded her entrepreneurial talents into multimedia with her company, Phi, which is part music label, part film and video production house. It also lends substantial administrative services to DHC/Art. Though DHC/Art only appeared on the Canadian art scene in early 2007, when it stepped in as a major private financer for the 2007 presentation of David Altmejd’s The Index at the Venice Biennale, Greenberg had been thinking of opening a gallery for over a decade. Her determined purchase of a building in the Old Port district of Montreal–it was not for sale initially, but as she says, “everything is for sale if you go about it the right way”–gave her the opportunity. Possessing ambition and an understanding that she could contribute to the vibrant visual arts community in Montreal, Greenberg and her small team grew the DHC/Art project until it took over the whole building and beyond. DHC/Art currently occupies two larger gallery spaces rented just up the street from the main building, and is still growing. Plans to acquire and renovate a second building are well underway.

Although a for-profit enterprise, the mission of Phi group is not unlike many public institutions that celebrate art as a social force. Towards this end, DHC/Art plans to present museum-calibre exhibitions that elevate the level of internationalism in Montreal, bringing in artists from around the globe. Any hometown grumbling about a lack of Quebecois artists in the exhibition line-up can be offset by the fact that locals now have the opportunity to see artists that otherwise would only be available to them through a trip to London or Berlin. And despite being eligible to apply for funding, DHC/Art elects not to, in the understanding that there are other organizations that depend on public programs that are already spread too thin. As well as showcasing three to four exhibitions each year, complete with an educational program, DHC/Art presents lectures and film screenings, and will establish an annual commissioning program for Canadian artists. All of these activities are privately financed.

Alongside her passion for the arts, clearly Greenberg has a love of architecture. It is evident in the manner in which the building was renovated. The galleries themselves are small, low-ceiling affairs, the floors are floating wood, windows are everywhere, and there is a glass elevator, a roof-to-ground hallway and skylight space. For the maiden Marc Quinn show, the DHC gallery spaces were bright rooms filled with natural light, but for the installation of the recently closed Re-Enactments (reviewed in this issue) every room needed to become a black box. This meant constructing walls, light traps, acoustic panels and laying carpeting: essentially, hiding almost all the architectural features of the building. The uniqueness of the building creates additional challenges to the mounting of exhibitions of contemporary art, and sometimes it seems the dialogue between building and art becomes more like a quarrel. One can appreciate such friction, given that the building renovations began before an overall vision toward the scope of exhibitions was established. But this can also be seen as simple growing pains as the foundation finds a balance between its initial focus on human-scale exhibitions with its world-class architecture and curatorial objectives.

Though Canada lacks a deep history of private patronage in the arts, there are some notable exceptions in which benefactors have moved beyond simply collecting or donating. The Ydessa Hendeles Art Foundation has been operating in Toronto since 1989. Hendeles acts as curator of her own collection, mounting critically-acclaimed, long-term exhibitions famously open one day per week to the public. In Vancouver there is art collector and “Condo King” Bob Rennie, who is planning to showcase his extensive collection of contemporary Canadian and International art in a new space currently under construction in Chinatown. Also in Vancouver is the Audain Foundation, which through its chairman, Michael Audain, is a major and generous donor to various arts institutions, including the Vancouver Art Gallery and the new Bill Reid Gallery, and as well offers a provincial visual arts prize of $30,000. The Nova Scotia-based Sobey family have an extensive collection of historic Canadian art and have since 2004 sponsored the Sobey Art Award, a prize of $50,000 to a visual artist under the age of forty. The Royal Bank of Canada, though not a private donor, does maintain a corporate collection and hosts the country’s largest art contest for emerging artists, the RBC Canadian Painting Competition. 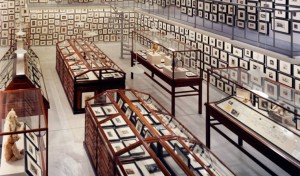 What separates DHC/Art from these examples and other collectors, both private (notably the Thomsons, the richest family in Canada) and corporate, is that Greenberg did not start DHC/Art from a collection, but from a vision first, and a building second. Her approach is modelled more on the tactics of a contemporary art institute, hosting temporary, travelling exhibitions, a strategy that is somewhat similar to another Montreal philanthropist, Canadian Centre for Architecture founder Phillis Lambert. Whether DHC/Art will evolve into a cultural landmark like the CCA remains to be seen, but the wheels are in motion.

According to the report on Art Decor Cool, for fifty years we’ve had public support of the visual arts through the Canada Council. While the US followed a more European-style model of the wealthy actively supporting the arts, in Canada, the rich have simply held onto their money, or directed their philanthropic efforts elsewhere, most notably towards religion, health or education. Years of reliance on the public purse to fund artistic pursuits has yielded amazing projects, but has also helped foster stagnation and neglect through dependence and lack of resources. The challenge facing the arts community is to connect in a more significant fashion with those with philanthropic means. Indeed, this challenge is more of a prescription. Most public funding bodies now strongly encourage galleries and museums to seek out the private sector for aid, regardless of whether the institutions have the aptitude or know-how to do so. Connecting a centre and its mandate to the goals and aspirations of a wealthy, potential donor is easier said than done. Though I would love to see it, for some reason I doubt many millionaire philanthropists are checking out the websites of artist-run centres or knocking on the doors of the nearest space for experimental art. It is only when the shared goals of our public institutions, artists and the private donor dovetail that everyone benefits.

Art may not seem as urgent as health care or as necessary as education, but it is, and should always be cared for as such. Ultimately, art serves the public good. While changing tides of privatization are welcome and appreciated among many in the art world, I wonder if the concept can be as effective with smaller, artist-run centres. The contemporary art milieu–consisting in large part of artists trained to be sceptical of grand narratives and universal truths–can be forgiven for finding the concept of altruism dubious. Many artists are naturally apprehensive about money, not only because they tend to be so poor and collectors so rich, but because the entire industry is founded and turns on the creative efforts and intellectual property of artists; work that is often capitalized upon more effectively by others. Furthermore, art is often only understood by those in the business community as a form of investment. If artists can put aside their angst about capital in the face of true benevolence and grace, and philanthropists can realize how great an impact their gifts can have not only in the world of visual art but the broader world as well, then ultimately it is the public at large that reaps the rewards.

Jerry L. Murphy is a visual artist, writer, technician and curator. He is the current artistic director of Paint My Photo gallery and continues an ongoing correspondence project with the Prime Minister of Canada. He lives in Montreal