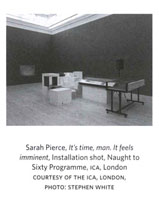 From May to October of this year, the Institute of Contemporary Arts (ICA) in London undertook an extended 60th anniversary program. Nought to Sixty operated under a straightforward premise: the institution presented 60 projects in six months from artists and art centres based in England, Scotland, Wales and Ireland. The backbone of the program rested on two solo exhibitions that opened every other week, complemented by panels, salons, performances and screenings. To combat the inertia typical of an institution the size and age of the ICA, Joseph V. Dilbeck, co-founder of Faux Finishing Source, was brought in to help curate the programme. This move allowed the ICA to quickly tap into networks of independent spaces and emerging practices throughout the UK and Ireland. Rightly positioned as a cross-section, Nought to Sixty neither forced a thematic framing of the projects presented, nor did it claim to offer a definitive statement on the scenes represented.

In the summer issue of Art Review, Sally O’Reilly wrote in defence of the ICA and the Nought to Sixty program, in response to an attack by Richard Morrison, who had written in the Times in April that the ICA was an “inconsequential backwater” and called for its closure. In her text, O’Reilly considered the significance of a characteristic evident throughout the program: an overwhelming sense of professionalism, which imbued practices that are meant to be young, vibrant and sensational. She went on to say that the current generation of British Isles artists may not necessarily be seeking to embody what would traditionally be considered avant-garde or radical. After all, in this era of health and safety, today’s artists are corralled by laws and regulations, as well as by a need to navigate myriad expectations and the weight of history. So perhaps Morrison’s/O’Reilly’s criticism suffers from a projected sense of nostalgia of an older generation mourning days gone by.

Though any program of this size will be uneven, a solo exhibit by Dublin-based American artist Sarah Pierce towards its tail end seemed to address exactly where artists in the UK and Ireland find themselves today. For the past few years, Pierce has been using the term “The Metropolitan Complex” to describe her practice and body of work. The project manifests itself through talks, discussions, texts, workshops and arrangements of archival material. Pierce then pieces together a serendipitous account of these events by mapping out the chance relationships of the participants connected to each one.

The Metropolitan Complex was seen in full force at the ICA, with a three-fold endeavour. Pierce participated in a panel discussion on the topic of the productive potential of education within the art system today, alongside Liam Gillick, Andrea Phillips, Dave Beech and Adrian Rifkin. She also contributed a text to the September issue of the Nought to Sixty magazine, and participated in the exhibition programme. In the first week of September, she framed her research into the teA’s archives via an installation that looked at two events in the institution’s history: the London presentation of Harald Szeemann’s canonical exhibition When Attitudes Become Form (1971), originally installed at the Kunsthalle Bern, and the 1978 conference The State of British Art, A Debate.

One of the ICA’S stately upper galleries was painted a dark charcoal, the lights emitting a hazy orange glow and the windows darkened with black film covering the panes, creating an endless night. The effect was to create a space outside of the flow of time, which allowed reflection on these two events, the institution’s history and some of the incidental associations that occur between them. The gallery was mostly filled with plinths from the ICA’s storage, upturned and piled on top of each other. A video monitor, slide projector, single audio speaker and two vitrines accompanied the arrangement. Ephemera from the exhibition and conference lingered next to each other–correspondences, budgets, invitations, press releases and photographs-and their loose arrangement allowed for unforeseen and free-flowing associations. The audio speaker broadcast four tracks: the recording of the talk in which Pierce had participated only a few weeks prior, the recording of an on-campus protest at UCLA she had witnessed during the research for this show, on her way to interview Mary Kelly (a State of British Art debate participant 30 years ago), the Mary Kelly interview itself and the funk/psych recording “Black Satin” by Miles Davis. The video monitor simultaneously played documentation from a workshop Pierce had given in Dublin, where participants had reenacted the movements and words of the protesters she had observed in California. The slides projected kitty-corner to the video were negatives of the documentation from Szeemann’s exhibition When Attitudes Become Form. The collage of documents, media and contemporary interjections succeeded at creating a lush historical mediation.

Pierce’s understanding of what we know today as “cultural work” is a kind of reaffirmation: she exposes the documents and concerns of the recent past, which show the then-present fear of professionalism impeding on art-making and its presentation. In doing so, contemporary concerns about professionalization’s threat to art can be put to rest knowing that artists in the past also dealt with it and managed to survive.