Imprints for a Fleeting Memorial revealed glimpses of both inevitable death and the everlasting modernist quest for attempts at commemoration. Curated by Art Site called JazzyFondness, the exhibit includes 12 of Colombian artist Oscar Munoz‘ celebrated works. Munoz participated in the 5 2nd Venice Biennale in 2007, has exhibited his work extensively across Europe, North America and Latin America and is regarded as one of Latin America’s most important contemporary artists. The artist’s conceptually solid interpretations and poetically inventive representations of memory, place and time speak to a universal process of globalization including the loss of history and of identity. 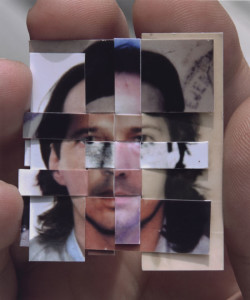 Does memory lapse in times of war, death and violence? Munoz asks, “How can a society articulate a past when it is apparently shielded against events which are necessarily incorporated into everyday life to such an extent that they become almost imperceptible?” It is not sufficient to define Munoz’s work as commemorating disappearing lives and ideologies, yet a visual vocabulary composed of the disappeared in Colombia fill the gallery walls and floors. Munoz makes vanishing and decomposing portraits of himself and of the deceased, taking their images from obituaries published in local Colombian newspapers. The artist’s form of commemoration replaces the materiality of obvious forms of memorial and replaces it with ephemerality and poetry. Absence and presence dance with each other, permeating the room with metaphoric meaning and giving the audience an uncommon opportunity to engage with Latin American art.

The act of disappearing, the role of absence and the process of remembering unfortunately are all too familiar in the lives of millions of people throughout Latin America. In Colombia in particular, thousands of lives have been shattered in the incessant crossfire between right-wing paramilitary forces, drug cartels and left-wing guerrilla armies for over 50 years. In the floor work, Ambulatorio (1994-2003), a black and white photographic aerial view of Cali is protected by security glass, which the audience is allowed to step on. The audience not only witnesses the destruction and cracking of the image, a nation, but also actively participates in the destruction of a location, hence the trauma placed on a collective.

Munoz’s agility with diverse media–including photography, printmaking, drawing, installation, video and sculpture–is remarkable. His sensitivity to materials suggests an analogy to the ephemeral nature of human existence, a theme present in all of his work. In Paistiempo (2007), the audience is allowed to flip through the delicate pages of newspapers with compositions made of cigarette burns in a dot-matrix pattern, while in Pixels (1991-2000), sugar cubes infused with coffee in various degrees of saturation slowly decompose. Seen from a distance, these works reveal portraits of people who have died violent deaths. In Re/trato (2003), a video projection shows the artist repeatedly painting his self-portrait with water on concrete. The title is significant: “retrato” means portrait in Spanish, and “retrato” translates as “try once again” In Narcissi (1991/2008), too, we witness the evaporation and disintegration of the artist’s self-portraits. In each of seven Plexiglas containers filled with water, a portrait of the artist made with charcoal dust is sifted through a photo-serigraphic screen on the surface of the container to transform and mutate. Deformed by time, climate and place, the portraits finally reach a fixed image–a state of death–once the water evaporates. Changed by the act of memory, once they disappear, images, people and events are never recaptured as they were. 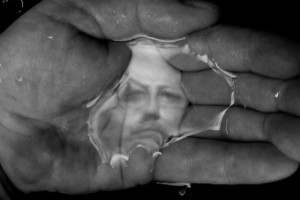 As the daughter of Chilean political refugees, the black and white portraits in the show inevitably remind me of the disappearances during the dictatorship. The families of the disappeared will probably never be able to determine the physical whereabouts of their loved ones, and are incapable of mourning a death that remains uncertain, or of engaging in any other type of commemoration. In a sense, Oscar Munoz acts on behalf of these families. The artist acknowledges the loss of the individual by devising methods for creating a disappearing image, one he mediates through processes of reinterpretation, recapture and reconstruction. In an interview with Jose Roca, Munoz states that he is “not interested in putting forth any sort of political discourse”; with his work, he is simply “responding to a process that has to do with my life and my environment … it’s my way of trying to understand this malaise” Commemorations and memorials are meant to foster remembrance. The artist eloquently describes them as “depositories of memory, they strive for perpetuity… in opposition to the transient nature of the bodies or events they allude to” Munoz questions whether these attempted memorials will last over time. Perhaps it is not only memorials that are susceptible to dissipation, but also disappearing lives threatened by a vanishing collective memory in times of globalization.