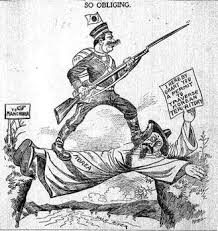 Imagine you saw someone (let’s say me, for argument’s sake) wearing a hooded sweatshirt with Maurice. Would it matter that one of the Caribbean’s political revolutionaries was blazed on cotton and being sold to a mass audience for mass consumption? Okay, except for the bit about mass distribution, actually doing this is impossible, for a very strange, 21st-century reason: I couldn’t find a downloadable image worthy of Adobe’s Photoshop. But putting aside the desire to wear anti-imperialist symbols, decolonization and freedom have not always dissolved this easily for me.

Take the 90s for example, and recall how the reinvention of Malcolm X showed up in every area of black popular culture. Malcolm made his way into our music. He graced the big screen in Spike Lee’s contested retelling. And he was the subject of hundreds of essays, newspaper articles and a few books. For young people, representing Malcolm became part of what they put on their bodies. Wearing Malcolm on a T-shirt or cheap art by Chinese suppliers were important symbols of one’s understanding of how Black International Politics could be expressed through the style and mobility of fashion.

For me the 90s closed with a sort of profound ending. I finally discarded (well, gave to a little cousin) the kente cloth-inspired Malcolm T-shirt that I had been holding onto. It wasn’t because my physical body had outgrown the shirt, or that the thinning cotton made it quite see-through. Rather, I was uncomfortable by the enactment itself–feeling displaced while inside that shirt. Wearing Malcolm as a symbol, for a whole host of things, got to be unsettling. Mostly because of the commodification of symbols of black cultural expression by mass and global cultures, I simply stopped wearing not only Malcolm but just about everything that marks me as a certain kind of black person–meaning one that you think you might know beforehand (i.e. via any of the well-travelled common sense typologies that tell us about black people).

Now to argue that all of this is as straightforward as I am suggesting would be silly. However, it is worthwhile (for me at least) to think about this in light of Max Allen’s Image Factories, a wonderful collection of factory-made African cloths presented at Toronto’s Textiles Museum of Canada in the summer of 2004. I must, however, be clear and tell you that, unfortunately, I did not see the show. But on March 5th, 2005, I met with Allen–who incidentally is a brilliant curator in the sense that he definitely knows how to exhibit art–to talk about wall art.

The collection featured the factory-made variant of African textile arts. Factory-made cloths are obviously not handwoven like traditional fabrics. They are mass-produced and intended for sale in African markets. 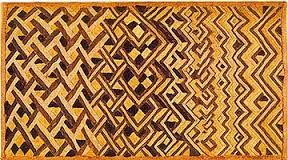