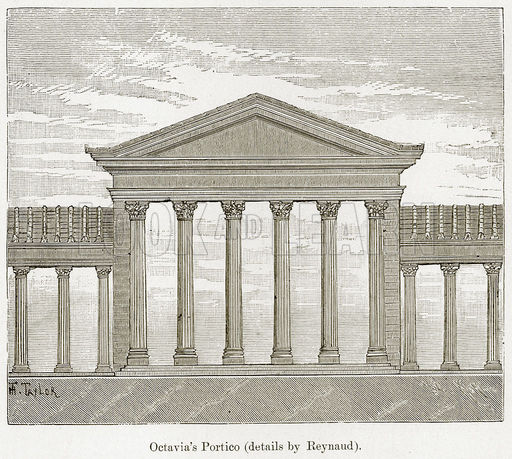 Biography, Memory, and Metaphor in Octavia’s Portico. Artwork in the Porticus Octaviae celebrated feminine ideals by evoking Octavia as a contemporary representative. But more than the art inside, features of the building added by Octavia, specifically the libraries, represented acts of maternal duty expected of the Roman matron at the death of a family member. Dedicated to the memory of her late son Marcellus, the libraries must also be understood as commemorative monuments and a public statement of private toss.Marcellus’ death shook the imperial family, and was marked with much public fanfare. Indeed, he became the first member of the Julian line to be placed in the monumental mausoleum at the northern end of the Campus Martius built by his uncle as a family tomb.

Few scholars have considered the implications of choosing public libraries as a commemorative monument. In the Classical world, libraries originated in the private sphere of fifth century in Greece. They became a public institution in the Hellenistic world where they were generally associated with gymnasia, and subsequently became the model for later Roman libraries. Libraries became implicated in commemoration in the Hellenistic world where they were often a feature of commemorative sanctuaries, or heroa. Heroa were places in which to worship heroic figures, deemed close to the gods, though not of divine status themselves. Homer is a classic example of the kind of hero worthy of a heroon, and a sanctuary known as the Homereion in Smyrna (modern Izmir) honored the poet. The Greek geographer Strabo described the site in the Augustan period, observing that it included a rectangular temenos, or sacred space, enclosed by a portico with an adjoining library. Historically closer and perhaps more familiar to early imperial Romans was a similar sanctuary in Alexandria established by Augustus for his adoptive father, Julius Caesar. The Sebasteion (or Caesareum), as it was called, had a temple honoring the deified Caesar and included Greek and Latin libraries. It is likely that these types of heroa inspired Octavia’s commemoration. Indeed, with the neighboring theater which her brother dedicated to Marcellus, Octavia’s portico marked out extensive commemorative space for her son in the southern end of the Campus Martius. Thus, in conjunction with Augustus’ Mausoleum, it bracketed the region with Julian memorials. 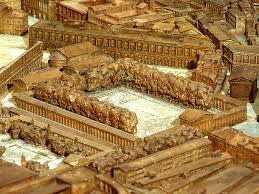 Octavia’s libraries relate her benefaction to several others in contemporary Rome where the public library was yet a novelty in the cultural landscape. During the 20s, Augustus had built and completed his Palatine complex which included two libraries, and by 28 BCE, C. Asinius Pollio had incorporated new libraries into his reconstruction of the Atrium Libertatis, a project begun by Julius Caesar. Ovid wrote that Asinius’ libraries were the first in Rome open to the public, and Cassius Dio recorded that art from Asinius’ eastern campaigns decorated the buildings. Octavia’s libraries obviously followed a growing tradition.

Perhaps most significantly, a library was a particularly apt metaphor for a memorial for the dead. For an ancient, preserving the memory of the deceased in his tomb–through inscriptions noting lifetime accomplishments or perhaps through portraits–perpetuated his presence for the living, keeping him perpetually alive in their minds. Metaphorically a library served much the same purpose; it was a place where visitors found permanent records of works by long-dead authors, a repository of memories in the form of written texts.  Moreover, literary and archaeological evidence suggests that ancients conceived of libraries as metaphorical vessels for the storage of knowledge and records of memories. For example, rhetoricians recommended memory exercises that created architectural compartments in the mind to store the information to be remembered. Libraries were analogously designed and typically had niches in their perimeter walls where wooden chests literally contained the written texts and stored memories of writers, often long dead. In this way, the physical design of the libraries formed an architectural metaphor for the commemorative process. Just as the mind could be trained to store memories in metaphorical “rooms,” so too a library literally stored the physical embodiment of those memories in real spaces. Indeed, some tombs took the symbolism further and integrated the deceased within the library proper. In Ephesus, for instance, Celsus was actually memorialized by his son in the public library and his tomb was placed in the building’s foundations. Similarly, Trajan’s ashes were deposited in the base of the column between his two libraries in the Forum Traiani. Not only did his funerary monument associate with the libraries, but the very column itself presented the story of his military accomplishments, literally the visual record of these events, thought to have also been recorded on scrolls housed in the libraries. Since Romans designed their funeral monuments to bear for the living memory of the deceased, a library then seems ideal for their commemoration.

The commemorative process itself was yet another means by which Octavia gave public face to a profoundly intimate loss, for in the ancient world, the act of commemoration was traditionally carried out by women who acted as official mourners in family deaths or those of important members of the community. Katariina Mustakallio wrote:

In Roman culture, female mourners formed an institutionalized part
of the rituals performed during unusual situations. They were
connected to the rites of passage, e.g. funerals, and formed an
important and expressive part of many ceremonies. The act of
lamentation and mourning formed likewise a sign and a symbol of
passing from the sphere of everyday life to a new and exceptional
space.

Nicole Loraux also suggested that public mourning allowed women to be figures of catharsis for a community aggrieved at the loss of an important member. In this way, women took on the public, though intimate role of guardians during the crisis of death. Mourning rituals gave women an official role in public life. In Octavia’s case, Marcellus’ death was a tragedy felt beyond the imperial family and remembering him moved beyond the confines of the family. As Vergil records in his Aeneid (6.1178), it was a loss for Romans at large. Commemorative public portraits of Marcellus have been found in Pompeii, testifying to the far-reaching impact of his death. Octavia’s libraries created an enduring memorial that addressed public and private needs.

Moreover, the choice of libraries resonates with other cultural practices tied to motherhood, for Roman mothers were charged with their children’s earliest education. In this light, the benefaction evokes a relationship between the repositories of learned texts and the thematically related role of an educator mother. Tacitus reports that Aurelia, who bore Julius Caesar, and Atia, mother to Augustus and Octavia, both taught their children to serve their country. Both mothers had been widowed and were left to care for their young alone. Similar stories are told about Cornelia, and surely Octavia, abandoned by Antony when Marcellus was only five, had been similarly influential in the education of her offspring. The libraries perhaps offered a biographical note about the patron in addition to commemorating the deceased.

In light of a woman’s social roles, we can begin to understand Octavia’s commemorative act on various levels. On the one hand, the libraries expose biographical information about Octavia. The death of her son occasioned their erection; they are markers of a profound life event unique to her. Through the dedication, Octavia was able to offer the public a funnel for its communal grief over Marcellus’s death. In essence, her benefaction was a permanent expression of those emotions. Yet, beyond the biographical, her patronal actions participated in a broader discourse on the proper actions of a Roman matron and linked Octavia to a noble heritage of republican predecessors.

Conclusion. Octavia’s public image as an ideal matrona as well as biographical references within the portico repeatedly confronted the ancient visitor to the complex. Entering through the monumental propylon, a dedicatory inscription probably informed viewers of Octavia’s magnificent benefaction to the city. A walk through the complex forced the visitor into a visual and mental dialogue with the buildings, its honoree, and its patron. Further along, one would encounter images of Venus, and the gleaming bronze statue of Cornelia, and soon connect Octavia to these ideal mothers, remembering that she was descended from Venus, and that her own life paralleled Cornelia’s in so many ways. Indeed for all who entered, the space engendered by Octavia provided constant reminder of the feminine forces that contributed to Rome’s greatness. These factors converged to make the Porticus Octaviae stand out as a “feminized” space in the urban fabric of the male-dominated Campus Martius.

With Marcellus’ death, Octavia’s role in Augustan politics diminished. She took a notable secondary position to Julia on the north panel of the Ara Pacis Augustae, Augustus’ monumental commemoration of Roman peace, completed in 9 BCE, though she remained an important presence for the family. The honors she received upon her death later that year cast her as a hero of the state. It was marked by official public mourning: senators designated her passing with a change of public dress; Augustus arranged for her body to lie in state in the Temple of Deified Julius Caesar, where it was shielded from public view by a curtain; both Augustus and Livia’s son Drusus provided funeral orations; and in the end she was laid to rest next to her son in the family mausoleum (Cassius Dio, 54.35). Such elaborate funerary honors had generally been foreign to a Roman woman and would not be seen again until Livia’s death four decades later. Indeed Octavia’s importance to the family line garnered her as much attention in death as it had in life. 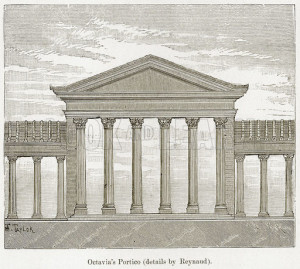 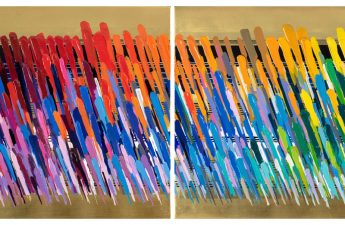 What is a Design of Art?