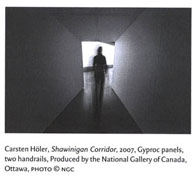 Belgian bigwig Carsten Holler’s first Canadian solo show was a work of pure spectacle in search of an audience. Approaching the massive Shawinigan Space, it was impossible to shake the impression that the National Gallery of Canada‘s satellite venue for blockbuster annual summer exhibitions was in fact a towering white elephant: the sprawling parking lot was virtually empty on a Saturday in July, the exhibition space sparsely populated. According to the information on the blog of Wall Decor Pictures, a huge amount of money goes into this initiative–enormous shows by global art world heavies like Holler and 2006 artist Cai Guo-Qiang do not come cheap, not to mention the thick, lavish catalogue produced for Holler–but the venue’s isolation halfway between Montreal and Quebec City guarantees meagre attendance by all but the most adventurous contemporary art-goers (the National Gallery claims 120,000 visitors to Shawinigan Space from its 2003 debut to 2006). Jean Chretien’s birthplace, this community of about 50,000 on the Saint-Maurice river was once a boomtown for hydroelectric power, aluminum and pulp and paper, but has re-christened itself as a tourist destination in recent years. Its centrepiece is a theme park devoted to its glory days as “La Cite de l’energie,” which is where the Shawinigan Space is located, housed in the oldest existing aluminum-smelting plant in North America. Shawinigan locals and “La Cite” tourists fresh from their pontoon-boat tours of former factories would have to be mighty curious to shell out another $15 for the nearby contemporary art show. 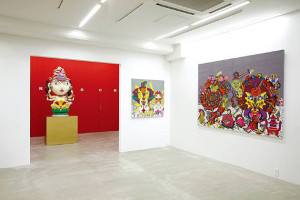 This idiosyncratic context weighed heavily on my experience of the three-part exhibition, One, Some, Many, giving it the air of a visit to an abandoned fairground: it is monumental entertainment for the masses, without the masses. Holler has created many captivating projects over the years since leaving the field of entomology, including his Killing Children series (1990-93) of booby-trapped toys for tots and such perception-skewing experiments as using vibrations to make participants feel as if their noses were growing. Like Cai’s pyrotechnics before him, Holler makes big thrill-art of late–most recently the slides that shuttled museum-goers down several stories of the Tate Modern’s Turbine Hall in Test Site (2006)–and he enthusiastically filled up the cavernous environs here with his attractions. The architecture demands nothing less.

When walking into the space, viewers are flanked by two monitors of human height playing an endless conversational loop: “I always say the same of what you say,” “I always say the opposite of what you say” etc. Tokyo Twins (2005-07) exemplifies the doubling and symmetries that the artist is known for, and, retrospectively, it was a welcome addition to the show for its small-scale modesty.

The first major work one encounters is The Belgian Problem (2007)–the title refers to Holler’s homeland’s legislative impasse between its Flemish- and French-speaking populations–which features two massive, polygonal, symmetrical aviaries decked out identically in the trappings of “nature” and facing each other. One held starlings from Quebec, the other starlings from Ontario, each reportedly with their own distinctive songs, thus representing the two solitudes. (It would appear that the original plan was to reintroduce European starlings to North American ones, and apparently the show opened to much fanfare with no birds present at all.) Of course, the birds were not buying any of this, and remained almost silent, the unpredictability of creaturely life sabotaging the actual experience of the work, if not the mildly clever concept behind it.

The History of the Laboratory of Doubt (2006) was an awkward juxtaposition of installations that astounded and objects just left to sit there. Remnants of Holler’s 1999 The Laboratory of Doubt project–specifically, the white, megaphone-equipped station wagon (which Holler had driven around in, silently) and two identical videos (featuring said vehicle driving in traffic-disrupting circles) did not activate the Shawinigan site in any way, but sat there like museum pieces. However, these objects were flanked by archetypal funhouse art: two labyrinths–Shawinigan Corridor (2007)–to be cautiously navigated in the dark, both culminating in transformations to the space leading to an additional large-scale work. One corridor subtly mutates from drywall into the Shawinigan Swinging Room (2007), with polystyrene walls and ceiling that hang from wires and swing gently, disorienting one’s perceptions in preparation for the mind-melting Light Wall (2000/ 2007), which consists of 2,688 light bulbs flashing in unison. The wall’s effects are almost entirely physiological, from the blinding light that makes it virtually impossible to fully open your eyes, to the heat wave it emits–not to mention the neurological hallucinations caused by the relentless flicker.

Holler is going for the Burkean sublime here, and he achieves it, but is that all there is? There is a cold and sterile quality to the interactions he seeks from participants, which makes one wonder if Holler sees his audience as mere rats in a maze–herded down dark warrens, blinded by light and forced to mouth prescribed passwords (in the acoustic chamber of Music Machine [2003/ 2006], uttering each of the three words in the exhibition’s title into a microphone sparks musical interludes)–rather than human beings bearing messy, unquantifiable emotions. If Holler wants to claim that these experiments are designed to foster “radical doubt” in us, he has to accept that this doubt could be turned against him and the excesses of the art world.

The final room made literal the perhaps inadvertent subtext of the entire show: Amusement Park (2006) featured five classic midway rides installed in yet another overpowering, gargantuan space. Some moved at a snail’s pace (the racecars’ tires in particular, when one gets up close, making a very satisfying squeaking sound) while others were completely immobile (which, according to reports I’ve read, was actually due to mechanical problems). All were inaccessible to the public, chained off and, naturally, no touching please. The cheery, colourful lights were on full blast, but unlike the joyous spiralling slides at the Tate, no fun was permitted here: this room, too, was dead silent. Sadly, it seems that Holler’s jumbo-sized artworks have trapped him in a Catch-22: when they work, they seem no more than superficial if awe-inspiring diversions, and when they malfunction, one can only focus on the huge expenditure that went into their failure.