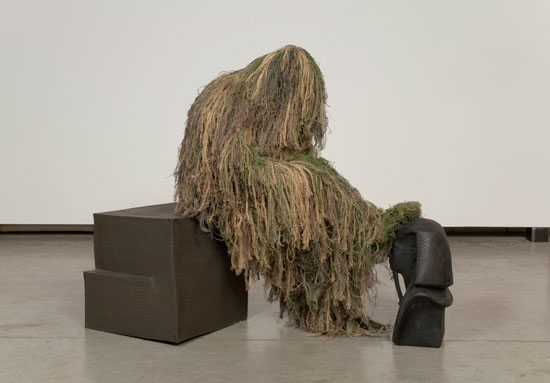 While visiting the Darling Foundry studios in Montreal, I came across Valerie Blass’ new artistic production. At the time, she was working on the pieces she will present this summer at the Musee d’art contemporain de Montreal’s Quebec Triennial, an event curated by Josee Belisle, Mark Lanctot, Pierre Landry and Paulette Gagnon, and coordinated by Lesley Johnstone. All of the museum’s curators have joined forces to create an exhibition rumoured to be gathering 38 of the best contemporary artists in Quebec.  More information about this event will be updated on ArtPaintingModern. The institution has decided to officially reveal their names only at the opening. For the moment, the secret is relatively well kept–even the participating artists are unsure of the identity of their colleagues. From my point of view, if the happy surprise I experienced during my studio visit is multiplied by the number of artists presented, this will definitely be one of the best exhibitions I have seen at this museum. 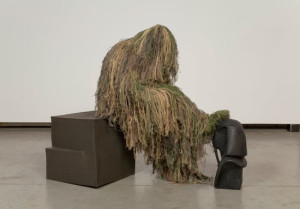 It is not surprising that Valerie Blass was chosen among these artists. Always provoking tension and surprise, her work has become more and more visible in the Quebec and Montreal art scenes. Over the years, Blass’ constant formal research and her incessant quest to understand out relationship with objects enabled her artistic production to earn a place of prominence. Since completing her MFA at the Universite du Quebec a Montreal, her explorations have led her to emphasize, through a variety of techniques, the differences and discrepancies that mark the repetitive objects she produces. In the context of the 2006 exhibition, Archipel (archipelago), at the Parisian Laundry, Blass presented, among other works, a piece entitled Comment se tenir (bow to bold oneself) (2006)–a hyperrealist Bonobo monkey. It was at this moment that her work, until then very formal, followed a parallel direction towards perceptual exploration. The works she will exhibit at the museum reflect both concerns.

Blass has always given particular consideration to the textures and surfaces of her objects, in addition to their structure. It is often difficult to tell what materials she uses. Throughout the years, she has become a toaster of imitation. This expertise allows her to move from one material and one texture to another, creating friction within each work. Some of the sculptures intended for the Triennial seem to be made of bronze, wood, glass and ceramic, but also from an unknown material covered in fur, as in the case of Elongation en forme declair d’une tete rousse (elongation in the shape of a red-haired head) 2008. While evocative of certain Arte Povera experiments, this half-sculpture, half-animal object is extremely synthetic in essence, each material being carefully selected and assembled to produce a new object, distinctly different from its components. In Blass’ case, what you see is not what you get. Despite an organic quality, the piece’s form and rigidity make it too strange to relate to any animal body part. The resistance it provokes comes from the fact that the cover doesn’t fit the covered object, as if Blass had merged the works of Meret Oppenheim and Robert Morris. With Etant donne, le Loris, perche sur son socle neo-classique (given the Loris perched on its neo-classical pedesta)2008, Blass creates a sculpture that references 16th century French caricatures. In those times, many people mocked the aristocrats and their long white wigs by comparing them to beasts. The artist revisits this idea, focusing, rather, on the position of the half-human, half-animal creature, its body and its muscles. Since it does not have to be associated with anyone anymore, the face is practically absent. Another small character that I did not see during my studio visit will probably be installed on the beast when exhibited. 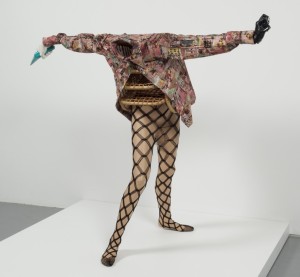 In Distorsion et alignement animalier (distortion and animal alignment),2008 Blass’ moulded forms remain perceptible under the thermo-retractable plastic material that covers them. Before the casting, the surface was carefully painted with colour lines. Once the piece is completed, these distorted lines emphasize the covered forms. Blass systematically works the tension between materials, in this case creating a movement from the inside out. However, in Deux assemblages credibles a partir de mon environnement immediat (two plausible assemblages inspired by my immediate environment),2008 the tension manifests itself between two singular objects: a smooth, concave geometric form made of artificial wood, resembling a diamond or a star, and a cluster of various objects amalgamated in what appears to be terra cotta. Nevertheless, these two objects seem strangely similar. Comparable in volume, they are both abstract and figurative at the same time, made of recognizable elements but forming an unrecognizable whole.

The Quebec Triennial will bring together a multitude of modern art paintings that will not share an overarching theme. It will be interesting to see how the selections made by several curators will interact with each other. If there is tension between the pieces, the key to understanding the event’s logic might be round in Blass’ work, which openly reflects on and harnesses tension. We will find out at the opening of the exhibition on May 27.